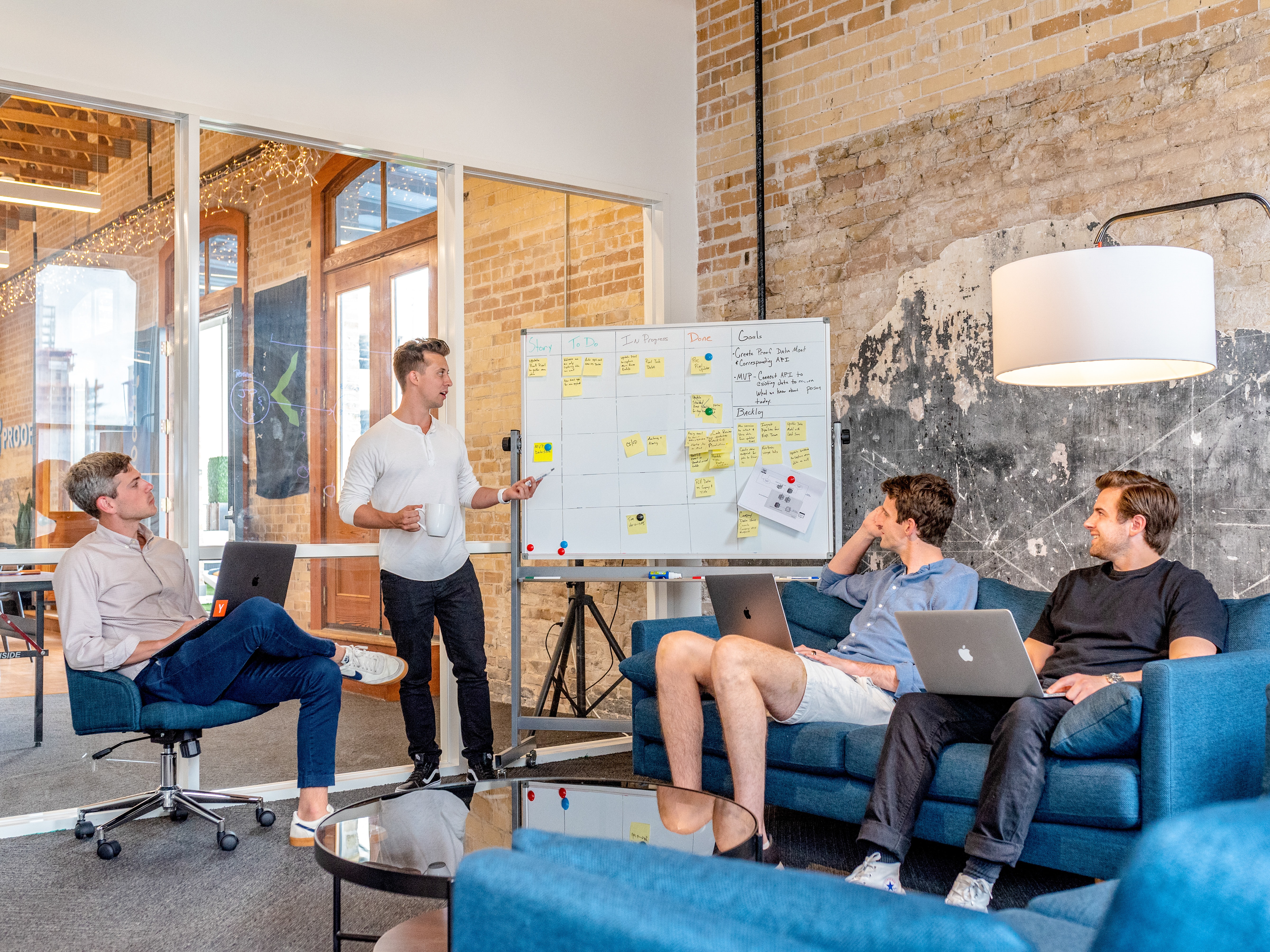 “Public speaking has always defied the traditional distinction established in linguistic scholarship between oral and written language. While it is most often scripted in written form, it cannot be placed on a par with writing. Conversely, it is spoken language, but cannot be assimilated with conversation”

Is a business meeting a conversation?

Is an interview a conversation?

An interview and a conversation are two different things. An Interview, just like a business meeting, is formal and structured while a conversation is informal and unstructured. In addition, interviews sometimes can be public and broadcasted through media outlets to be viewed by others. In contrast, conversations are exclusive to those who are a part of it.

Is a round table discussion a conversation?

A round table discussion is again a formal discussion, which has a clear agenda, and maybe scripted. On the other hand conversations are informal and may rarely have an agenda.

Is a Debate a form of Public Speaking?

The main difference in a conversation compared to a business meeting,an interview or a round table discussion is that a conversation is informal while the others are formal.

All these skills, however, are related. Therefore, one of the benefits of mastering public speaking is that you will get better at Debate, discussions, business meetings, interviews and even conversations.

Differences between Public Speaking and Conversation

The main difference between Public Speaking and Conversation is that, the former is Structured, while the latter is Unstructured.

A topic for a speech is predetermined by the speaker or by the event. In other words, there is a clear objective that a speaker must achieve in the end. In order to achieve this objective a speaker will use an obvious opening, body and conclusion with a logical flow to transition from one idea to another.

On the other hand, conversations are free-flowing and devoid of structure. The topic of conversation may or may not be set, and can usually meander into unrelated territory as the conversation progresses.

While modern public speakers tend to use informal language and colloquialism to connect with the audience better, the language is still much more refined compared to a normal conversation.

Take the following example. While you can see colloquialism in both the speech and the conversation, language used in the speech is refined and relatively formal.

Public Speaking is deliberate, Practiced ahead of time and carefully planned. Conversation is spontaneous and the complete opposite.

When delivering a speech, the speaker will usually have time to write, edit and practice the speech. A speech may be delivered by reading the script, dictating a memorized script, or by using an extemporaneous method.Even in extemporaneous speech – a speaker carefully and deliberately chooses his or her words to deliver a predetermined message.

In contrast, a conversation does not have a pre-planned script and is not rehearsed.

Public speaking has a formally recognized speaker who takes center stage and an audience who is focused on that one speaker.

In conversation, the focus varies from one person to the other. While one person could be dominating the conversation at one instance – another could easily steal it.

Speeches are time bound. Their timing is determined in advance while Conversations can be brief or may never end.

In a conversation, however, a participant can go on and on if they so desire. Setting aside that a person may not have any friends after a 1 hour rant, a conversation has no agreed time boundaries. You go on until you’re done…or until everyone leaves.

For example – conversations can happen face to face, over the phone, via text, via chat groups, social media or via email. As long as there is a channel of communication, a conversation can be established.

For Public Speaking to happen, however, it requires an event with a live public gathering. Because, though you can speak to a friend over text, you can not text a speech.

Conversations are situational. You may have a conversation with someone merely to pass time, to be polite or to build a relationship. When the circumstance calls for it, you’d strike up a conversation with a person or a group, and nobody needs to give you permission for this.

On the contrary, public speaking happens due to a recognised need. There is always a formal invitation to speak and uninvited speakers are awkwardly thrown off stage (i.e – Kanye West at the VMA awards 2009). Usually, this invitation would be to an event such as a wedding, a funeral, a conference, or a ceremony that warrants a speech. Where there is no need for a speech it may never happen.

When delivering a speech, there is a formal responsibility on the speaker to produce worthwhile content. You should either be truthful, entertaining or motivating. You must be prepared and engaging. You must stand out. These are big responsibilities, and they give all the more reason for a person to fear public speaking.

In a conversation, however, one person isn’t formally responsible to keep a conversation going or to keep it interesting. The responsibility is distributed. In a conversation, it is also not essential for information to be factual or reliable. Hearsay and research are both welcome while verifying sources is optional. It is up to everyone involved in the conversation to make it worth the while. Additionally, you’re forgiven for mistakes in communication or a lack of knowledge in a particular topic, it’s all part of being in conversation. Therefore, the responsibility one person has to what is being said is relatively low.

In Public speaking, only one person speaks. While the speaker may adopt a style that mimics a dialogue with the audience, it’s pretty much one person doing most of the talking.

A conversation thrives on interaction. Once something is said there’s always a responsibility upon the other person to reciprocate, verbally or non verbally, or else the conversation dies until you hear crickets chirp. It isn’t a passive activity. Because you are obliged to interact, in a conversation, it is hard not to pay attention.

On the flipside, Interaction between the speaker and the audience, during Public Speaking, is optional. Speakers control this as per their comfort. There is no obligation upon the audience to react or respond to what a speaker is saying either. It is up to the speaker to use his/her skill to get them engaged – and this responsibility is purely upon the speaker. Some speakers use games, rhetorical devices, Q&A sessions and other techniques to encourage interaction while others keep reading off a script with little to no effort.

The worst thing to do in public speaking, however, is to not encourage interaction. This will send your audience to sleep faster than horse tranquilizer in their coffee.  It’s easy to be distracted when you have nothing to contribute. That’s why it is a skill of a good public speaker to keep you engaged even if you have no obligation to reciprocate or interact.

Public speaking happens in public. It’s in the name itself. Public Speaking also has a primary and secondary audience. The Primary is the live one he or she is speaking to, and the secondary is the audience that would view the recording of it (audio-video recorded or transcribed). With the advent of youtube, and social media – Public Speakers now understand that after they are done speaking an audience is most probably going to view their message. Speakers sometimes give more focus to the secondary audience than they do to the live one.

This is not true for a conversation which is exclusive to one audience. Even at a party – two people who are talking to each other in a corner will hush as soon as someone foreign joins them. Because, conversations are naturally insulated among the few who have permission to listen in.

Public speaking would have a physical or virtual stage for the speaker, a conversation happens with both or all in an equal stage/setting.

Public speaking may use visual aids to assist the point, which is unnecessary for conversation.

Colourful emotions are premeditated in public speaking, where it is more theatrical and emphasis is placed on the full visual experience to the audience. Conversations however, emotions are elicited as a reaction to what the other is saying.

Linguistic distractions are welcome in a conversation “like, um, You know what im sayin?”. Filler words such as this is discouraged in formal oratory.

What are the Similarities between Public Speaking and Conversation

for effective conversation and public speaking, you must know your audience. What you say and what you do not say must be curated to suit those who are present, their interests, their culture and level of comprehension.

formalities, conventions, friendliness, politeness, nuances based on culture and politics is essential when it comes to speech and conversation.

Communication of any form needs to make sense. If not, it becomes useless and incomprehensible.

A Speech with meaning, and a conversation with meaning makes a great impact. People remember it for a long time.

a good conversation or speech is deeply engaging. They move us emotionally and we end up wanting more.

Whether you’re speaking in public or having a conversation, good storytelling is a great tool to engage your audience. You will find them attentive, and truly interested in what you have to say. Because stories help establish an emotional connection.

In both the expression of meaning comes not only through words that are pronounced, but also the vocal variety and body language (hand gestures, facial expressions, pauses, pitch, eye contact..etc)

In both instances you must feed off the non-verbal or verbal energy of the audience and constantly tweak your approach on your feet to sustain interest. This is mostly done unconsciously in a conversation but consciously in a public speaking setting.

without eye contact, you lose your audience, whether it is a conversation with one person or a speech to a thousand people.

Who doesn’t want to have a good laugh? You can be the center of attention in a conversation by cracking jokes or be a sought after public speaker with good comedy skills.

a great conversationalist will make you feel like they are like you. Because we like people who are like us, it’s a great way to connect with an audience. A public speaker will come to a common ground with the audience to establish rapport. This is the only way a lawyer can speak to an audience of engineers successfully or vice versa.

Yes you can get paid to have conversations. Ever heard of customer service? Additionally there are enough people demanding a virtual friend to chat with. Public speakers on the other hand get paid to speak at events and thats great too.

Fear of public speaking and Fear of Conversation are related. Both stem from social anxiety disorder where people believe that speaking will bring upon themselves severe and harsh negative judgement from others.

The price of mastery is hefty. Unless you pay up, no one will pay it on your behalf. If you are in the path to mastering speech – you must understand the skills of a public speaker.